The impact of interest rates on home ownership – a primer 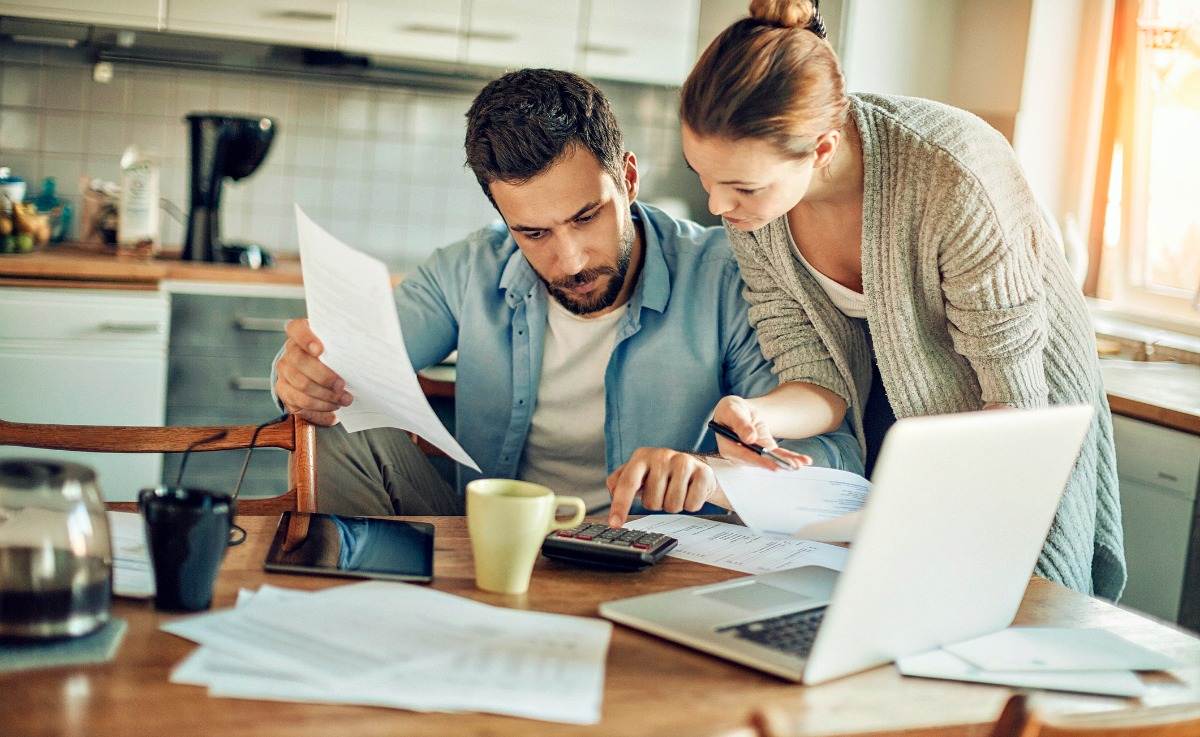 But what exactly is happening? How do interest rates rise and fall? And what impact could this have on housing prices and mortgage rates?

This primer aims to address basic questions about interest rates, inflation, and the potential impact on the price of your current or future home. For answers specific to your particular situation, we recommend you contact a financial adviser.

How are interest rates set?

Federal law states that banks are required to keep a minimum amount of cash on hand. This is called the reserve requirement.

But bank balances aren’t constant, as customers deposit or withdraw their cash. As a result, banks sometimes need to borrow money from other banks, overnight, to meet their reserve requirement.

But why? Banks look at the federal funds rate when setting the interest rates they charge their customers. The prime rate is the interest rate that banks charge their most qualified, credit-worthy customers (usually stable businesses). This is determined by each individual institution, typically around 3 percent above the federal funds rate, according to GoBankingRates.

When the Fed lowers the federal funds rate, banks can access money more cheaply, and they can pass those savings to their customers via lower interest rates. Cheaper borrowing spurs more home buying and business growth. This creates higher demand for some products and services, from construction materials to furnishings to appliances, which leads to more jobs and production.

Insight: When the Federal Reserve changes the federal funds rate, it impacts everything from employment to the production and price of goods and services.

Conversely, when the Fed raises the federal funds rate, banks raise the interest rates they charge customers. This dampens the enthusiasm for borrowing, which may mean fewer people purchase homes or expand businesses.

If the Fed is concerned about inflation, it might raise the federal funds rate to stabilize economic growth. In 1979 and 1980, for example, the United States experienced double-digit inflation. In order to curb this, the Federal Reserve kept steadily raising the federal funds rate until, in 1980, the rate reached a historic all-time high of 20 percent, as the New York Times notes (you can also see how rates have fallen and risen through the decades).

By contrast, in 2008, the U.S. economy experienced a severe recession. The nation’s gross domestic product, a measure of the total value of production within the economy, decreased significantly, according to the Bureau of Economic Analysis. To stimulate GDP and raise employment, the Fed lowered the funds rate to a historic low of 0.25 percent (setting the range as 0 to 0.25 percent, meaning that the rate is as close to zero as possible).

In March 2018, the Fed unanimously voted to raise rates by another quarter-percent, and indicated that it will probably nudge rates higher two or three more times throughout 2018, plus three more times in 2019, according to The Wall Street Journal.

Impact of the federal funds rate on mortgages

The federal funds rate, and by extension banks’ prime rate, creates a benchmark for the cheapest available loans. But the relationship with mortgage interest rates is imperfect.

This might not sound like a big difference, but when it’s compounded over the length of a 30-year mortgage, these fractions add up. 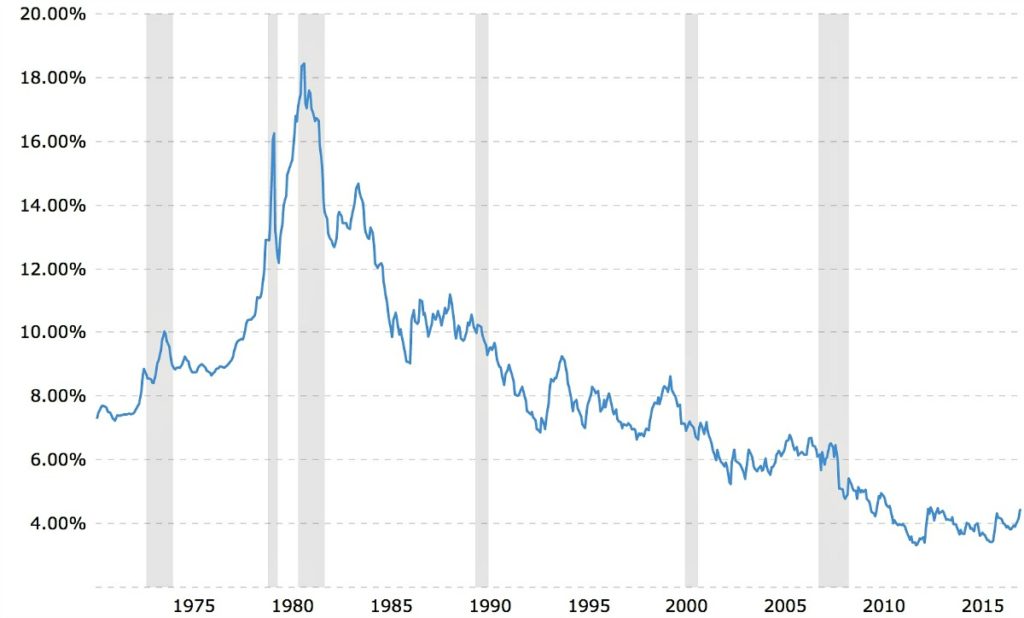 But mortgage rates are influenced by more than just the prevailing federal funds rate. They’re also influenced by Department of the Treasury yields, investor sentiment and inflation rates, among many other factors.

And not all types of mortgages are impacted in the same way. Every lending institution, such as banks and credit unions, chooses the interest rate for their mortgages. These mortgage rates vary based on a wide variety of factors, including length (such as 15 years vs. 30 years), dwelling use ( primary residence vs. investment property), and terms (fixed vs. adjustable).

The creditworthiness of a borrower also impacts the type of loan and interest rate for which they qualify. Borrowers with a lower credit score or a smaller down payment might get hit with a higher interest rate, or might be required by the lender to buy mandatory mortgage insurance. This results in higher monthly payments, which limits how much home a buyer can purchase.

Conversely, a borrower with a 20 percent down payment and a strong credit score might qualify for the lowest interest rate that the lender offers. As we discuss below, this means the borrower can qualify for a larger loan.

What could happen to housing prices?

That said, there are two questions at hand: How could interest rate changes affect the housing market in general, and how could it affect your ability to buy or sell your own home?

Let’s start by looking at the overall market.

If mortgage interest rates rise and everything else stays the same — borrowers have the same income and same debt levels — the borrower won’t qualify for as expensive of a mortgage as they previously could. For example, if a borrower qualifies for a maximum monthly payment of $2,000 per month, and mortgage rates rise, then interest will gobble up a bigger chunk of that $2,000, leaving less space for principal.

This could put home buying out of reach for some, or put stagnant or downward pressure on home prices. 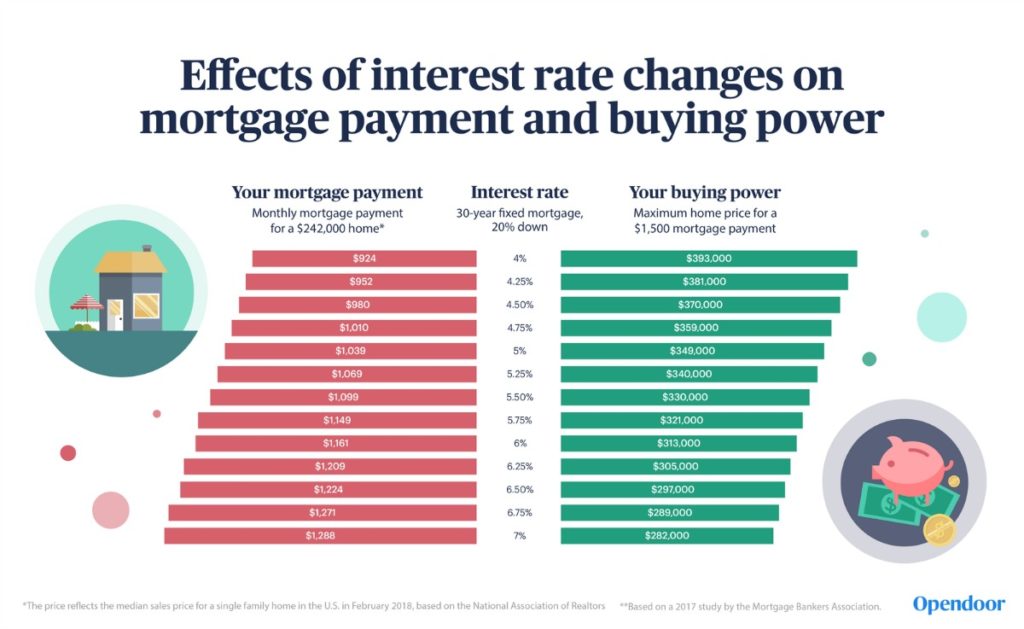 Changing interest rates can make quite a difference for home buyers and sellers. For example, a 0.5% rise of the interest rate can result in a 6% increase in the monthly mortgage payment (our numbers include monthly principal and interest only) and a ~5.8 decrease in house purchasing power.

But an alternate scenario could also unfold.

If employment rises, or salaries and wages grow, or consumer debt falls, or lending criteria loosens, then borrowers may still qualify for similarly-sized or larger mortgages.

Sure, interest rates may rise. But this uptick could be offset by other economic factors that improve borrowers’ positions.

The outcome isn’t as simple as assuming higher interest rates are bad for the housing market. A variety of factors, from wages to employment to lending requirements, influence the number of homebuyers in the market and the maximum price of homes for which they qualify. And this impacts everything from median sale prices to the average number of days-on-market.

For example, Las Vegas has undertaken several major spending projects. They include the construction of a $1.8 billion NFL stadium, as the Las Vegas Review-Journal reports, and a $30 million upgrade to its downtown entertainment district, according to Las Vegas Now. Nevada also had the fastest job growth in the U.S. in 2017, according to the Las Vegas Review-Journal. This growth will impact the local housing market, likely stimulating the economy with more jobs, but potentially driving up prices.

What should you do if you’re buying?

If you’re thinking about buying a home, focus on becoming a well-qualified buyer. This might involve negotiating for a raise, paying off your loans, or saving for a strong down payment so that you secure a better loan-to-value ratio.

Learn about the many mortgage options available, such as Federal Housing Administration loans, Veterans Affairs loans and US Department of Agriculture loans, which may expand the range of properties for which you qualify.

Shop around for your mortgage. Lenders will offer different rates, and you might shave thousands from your total interest payments by comparison shopping.

What should you do if you’re selling?

If you’re thinking about selling your home, focus on the factors within your control, such as repairs, curb appeal, painting, decluttering, and staging. The classic principles of selling a home — ensuring it’s in good condition, clean, and well-photographed — remain true in all markets.

Timing the sale of your home is always tricky, and trying to sell based on interest rate hikes may not help. It might be tempting to rush to list your home before the Fed next convenes, but other factors, such as the season, local wage growth, and population increases also impact market conditions. Interest rates may dominate the headlines, but they’re only one of many variables.

Both buyers and sellers can keep tabs on mortgage rates at Marketwatchand Bankrate, as well as through news and forecast updates from Kiplinger, which includes stats on job growth and GDP growth.